Helpdesk at Commissionerate of Taxes (COT) data center, Kar Bhawan provides services ranging from all levels of technical support relating to software, hardware and network related problems and user training. The department has a centralized heldesk which provides support services to users working at around 70 sites under the Commissionerate of Taxes. There is a helpdesk software through which users across various offices can log a call and raise a ticket number for any problem relating to usage of software and other problems relating to IT system functioning. Once the end user raises a ticket number for any issue, the matter is forwarded to Administrators of helpdesk system who forward the call or allocate the call to respective engineer depending on the nature of the call. The respective engineer then gets the call under his/her helpdesk login account and attends the call. If the call is relating to hardware issue, the engineer attends the call and updates the same in system the status of the call. For outstation calls, appropriate vendor is contacted by system administrator and call forwarded and followed up on regular basis till its closure. For network related calls, the network administrator follows up with the respective network provider and updates the status in the system on resolution. For software related calls, if the issue is relating to some rectification on account of mistake done during digitization of records, then approval is taken from higher authority and then attended at system level.

Apart from these, there as four helpline numbers namely (+91-361-2232619/663) operational during office hours for attending user queries relating to IT systems, giving telephonic support to both internal and external users. For any major problem faced by external users, they are advised to contact the concerned unit office/checkgate and the unit office/checkgate raises a ticket on their behalf. Issue of minor nature like queries, guidance, clarifications are handled over phone.

Helpdesk related services are provided by nearly 16 number of technical resources and one ITO of the department. ITO monitors the overall functioning of helpdesk related activities and regular review meetings are held within the support team to improve the level of support.

Daily around 50-60 phone calls are received and the helpdesk has provided support to around 32,000 external and 1500 internal users of systems.

All the calls whose ticket numbers are issued are generally closed by the end of the day except for some which require further analysis by the software or by other team members or which requires approval from higher departmental authority.

The helpdesk system has facilitated the users of COT’s IT systems both internal and external in using the system effectively. 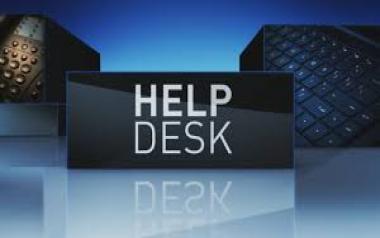